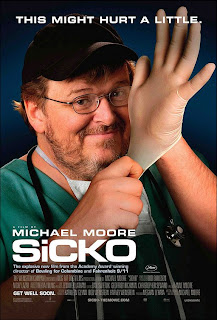 I'll admit it I was pretty naive about the health care "problem" when I went to see this film. I thought we had it bad but since we are in fact, the most powerful, rich, and supposedly most advanced society on the planet I thought we must have it better than everyone else! Sure in my short life I had fought my fair share of battles, had to pay money when I had been told it would be covered, had to battle about this or that, but I thought that maybe it was me, perhaps I was just disorganized, bad at communicating, confused etc. To add to that my parents have also had more than their fair share of difficulties through the years with them and to top it all off my grandfather was told to swich from his county firefighters insurance to Humana because it would be hands down better for him-a few months later he found out that he has Lung Cancer and his treatment is not covered. He had now stopped chemo and radiation because he doesn't want to leave his kids with the debt when he goes. Let's just say I thought it ran in the family, that we all just had to learn more and be more careful.
Enter Sicko:
Now, I know what you are going to say: "Mickelle Michael Moore is bad-he lies, he uses other's pain for profit, he doesn't offer solutions-he just stirs up trouble" Even if any of this is true, and I'm not willing to say that he isn't/doesn't, I went to see the movie after hearing an interview featuring Michael on his new movie. It peaked my interest-you mean-maybe it wasn't me, my family that have this problem?
The movie was at the very least educational and at the best eye opening. My assumption that we had it better than the rest of the world was quickly replaced with: When do we move? I do realize that the movie may have been a dramatization of the worst and best possible scenarios from each side, however, ANYTHING would be better, in my opinion, for our country than companies profiting from us being sick!
This being said I would love to encourage any of you that have not seen it to go and form your own opinion-prove me wrong and convince me to stay in America, I don't care just HAVE AN OPINION!
Posted by Mickelle at 11:54:00 PM