One way to try to clean up our air!

If you see someone's car or truck giving off too much exhaust you can take down their license place number and call
944-SMOG and they will send them a letter in the mail.
Posted by Mickelle at 2:40:00 PM

My letter to the superdelegates

My Story is simple:
I have been following politics since college when it was Bush v. Gore. When president Bush was elected the first time I didn't know any different(I was new to paying attention) then as I began to learn more and more about the process, and it's profound affect on not only my life but the life of our amazing country I was astonished when President Bush was elected again. Let me be clear: I do not hate president Bush I also believe that he has done the best he can and what he thinks is the right thing. However, it has not necessarily been what is right for the country here at home or abroad. When it came down to the choice between Hilary and Obama I made my decision carefully because while I respect the Clinton's very much and they did an amazing job during Bill's presidency the world is a very different place today. To solve today's problems it seems to me that we need a drastic change and new, fresh ideas. Not only a leader of our country but a world leader capable of earning the respect of the rest of the world back.
For me, as a 20 something woman voter Obama is my choice for a number of reasons but the biggest one is because we need a change-a big one and Obama represents that to me.

Picking up after the pooch. 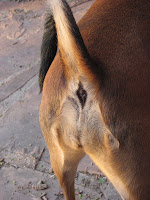 While walking my dog on a day when the snow had all melted I noticed many, many shall we say
Posted by Mickelle at 1:01:00 PM