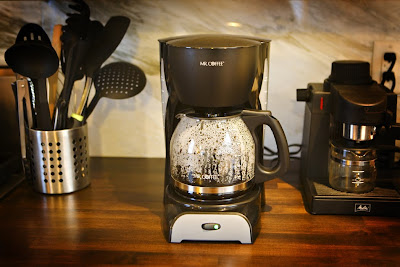 So far in my life I have managed to escape with a few, harmless, yet ferocious vices.
They are, in no particular order: ice cream, bad tv and craigslist.

I have managed to avoid the oh so common: "I must have a cup a day of coffee in order to feel normal" -thing- but yesterday, while in Smiths something happened that I can only describe as genetics combined with a great sale.

My family, who's only real common worship of an identifiable belief can be summed up in: boating, coffee and Budlight. Other than those things, we are one of the most diverse of any family I know--and I like it that way.

All of my childhood memories are tied to coffee, the smell in the morning at our house, the sound of any one of my uncles at Flaming Gorge noisily rummaging through camping gear to make a fresh pot to share, and even every Christmas morning bargaining with my parents to get out of bed in the wee hours by offering to make coffee if they would finally get up(usually at 3 or 4 am).

So it may be interesting to note that SM and I have so far resisted getting our very own coffee maker to make our home complete.
Long story short: I never felt the need to add yet another vice to my life and actually like to stop through the drive through at the local coffee shops for the occasional treat.

Yesterday though--yesterday when a very basic model was on sale for under 20 and some, coffee drinking, family tradition gene took over-- I caved.

So welcome to the family Mr Coffee! Here's to many good years and to low cal
options after the initial newness wears off when I start gaining "coffee weight"
Posted by Mickelle at 11:30:00 AM

Foster Art Program: I am in LOVE

When I was invited to join in on the first Foster Art Program I was at once salivating. The list of artists was even more intriguing, and once the first meeting came along I already had my list in my head.

We ended up fostering several artists:
The first, and the spotlight today is Thomas Aaron 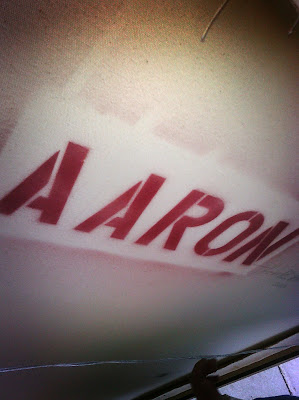 We have known Tom for a few years as a friend and have always admired his work.
When we went to pick out our piece to foster we knew immedietly which one we wanted.
When we realized that it would not fit in the Fit(a first for us--sad day) Tom told us just to carry it home--I was incredibly doubtful(plus I was in heals) but without many other options we picked it up and started the 2 block journey home. 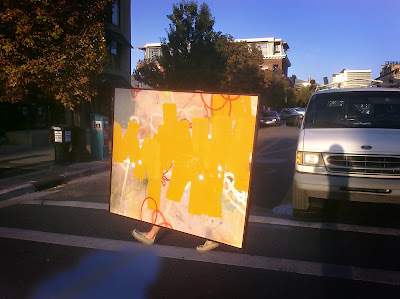 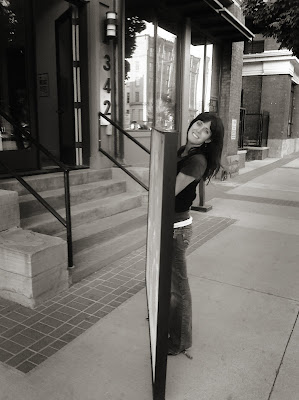 We hung it and now have been enjoying for about a week. This piece speaks to me on so many levels: it's design aesthetic, color, complexity and size all make for a perfect statement for what we have deemed to be our "feature wall"
Thanks Tom! 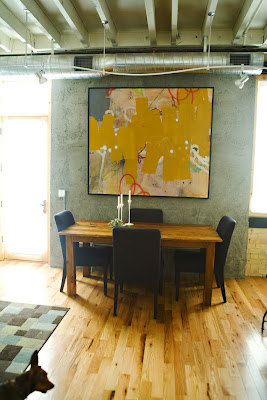 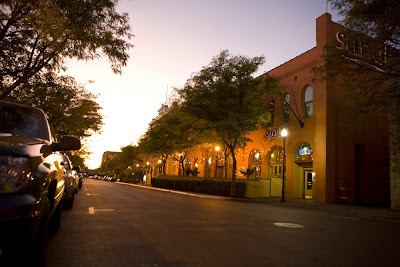 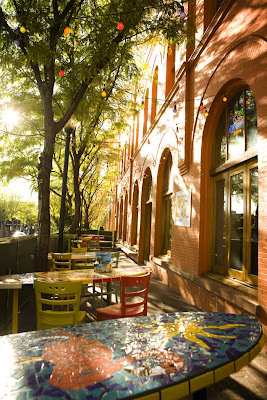 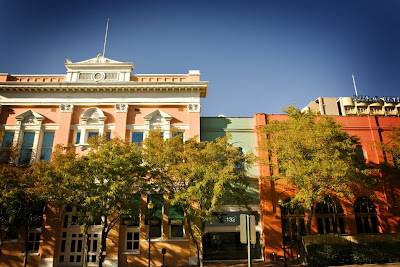 I'm not sure if you can feel it but the winds of change in our fair city
are a flutter and it has a name: Pierpont Entertainment District.

Home to some of SLC hottest clubs(note not private clubs for members any longer!) E Pierpont Ave is poised to be THE place to be on the weekends if you want a great time, walk-ability and beautiful people.

E Pierpont Ave is hidden between 200 & 300 S and 100 & 200 W and is flanked by all of the best restaurants in the city. Included are the likes of Red Rock Brewery, The Metropolitan, Squatters, and last but not least Acme Burger. Additionally, on the opposite side and next door to one another are the Hotel and Elevate--to dance the night away. But Pierpont, oh little Pierpont is coming into it's own and is a happy addition to the weekend flurry of fun. With the legendary Lumpy's(has to be part of some kind of historic registry by now) and the recent addition of the Sandbar this quaint street is hoppin' and if you don't want to dance but you want more than dinner this is a great alternative for a great night out.

Bottom line: ditch your car, get glammed up, and hit the town-this is not to be missed!
Posted by Mickelle at 11:44:00 AM

Labels: Daily SLC Style, Events, Local Reviews, Where to see and be seen


Tonight's stroll is not to be missed!
a little food, a little art, a litte fashion show--what's not to like?
Plus you know you have been hibernating(and for good cause-the weather has been brutal!) but it is time to wake up, get out and see what is going on in the SLC art scene
Get a printable map here
Posted by Mickelle at 11:18:00 AM

Try the Monki--a refreshing alternative to "don't touch the Monkey" 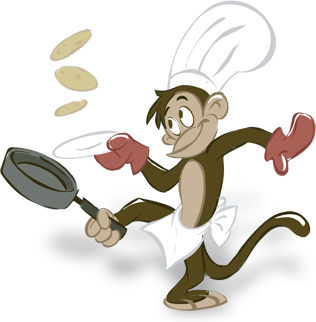 Those of you--you know who you are: well you know that I LOVE and embrace technology and allow it to run my life. This fetish and dare I say obsession is often fueled by
my tech geek superman husband who feeds it and fans the flame and sometimes roasts marshmallows and makes smores over it...again I digress....

What my internet bot filled life has been missing(and mourning) is a way to make a shopping list from a recipe and then save it--all online, all accessible from the mobile device of my liking(nope not going there--no religious wars on this blog--well, not today anyway)

Today: I found it--or at least the Beta version of it--in Kitchen Monki

It is everything and more that I would want(it even links to facebook if you so desire) Try it--I will be for the next 5.2 minutes and believe me: if it fails the test you will hear that too--otherwise I will be happily integrating my somewhat meager recipe collection and making list after list--just for list sake--

Go ahead: pet the Monki-you know you wanna
Posted by Mickelle at 5:49:00 PM

Check it out--SLC is still on the rise--I could really get behind this! 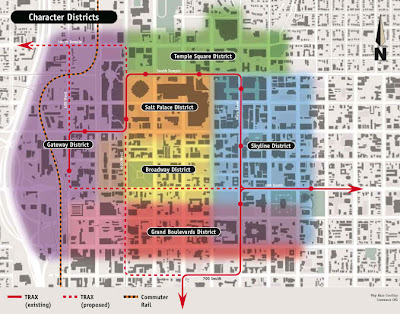 It's where a new corporate headquarters building and high-rise apartment buildings feel at home. The new mixed-use City Creek Center anchors the northern edge of the Skyline District. Mid-rise residential buildings line 200 East in a "Park Avenue" concept featuring green parkways in the center of the street, creating a pleasant, leafy pedestrian-oriented environment.

Temple Square District
The calm and tranquil antithesis of the Skyline District to the south is the Temple Square District. It is green, contemplative and at a slight remove from the material world. Centered on the majestic Salt Lake LDS Temple, built with pioneer determination over 40 years, the Temple Square District is the historical spiritual heart of downtown. It contains not only the important religious buildings on Temple Square itself - the city's and state's largest visitor attraction - but also a major employment center at the The Church of Jesus Christ of Latter-day Saints office complex, and a new higher-education center composed of the LDS Business College and Brigham Young University's Salt Lake City extension. The Temple Square District has promising opportunities for serving as a key link in efforts to connect the Wasatch Range with the Jordan River Parkway by a network of Green Loops.

The Broadway District
is one of the places Salt Lake City goes to have fun. It is the lively epicenter for the arts, culture, entertainment and hospitality. It is animated, bold and lively. The Broadway District takes its cue both from the historical name for 300 South - Broadway, which the district is centered on - and from the quintessential home for theater and entertainment in New York. The Broadway District contains the theaters, art galleries, restaurants and bars that make downtown the cultural center of the Intermountain West. The Broadway District is home to growing population of residents living in new condos and converted loft- style flats, and it includes the Downtown Public Market, located in a permanent home in Pioneer Park or elsewhere in this area. The District is enlivened by the creation of interesting places for bars, restaurants and shops in the interior of blocks, connected to the street by pedestrian passageways.

The Salt Palace District
is all about hosting and caring for our visitors. It feels welcoming, friendly and gracious. With the newly expanded Salt Palace Convention Center at its core, the Salt Palace District is the place for conventions and trade shows and their related hotels and services, the place people temporarily call home while visiting the city. Because of its focus on visitors, the Salt Palace District is closely intertwined with and overlaps the Broadway District, and could serve as home for a large performing arts center to house professional traveling shows and other events. The Salt Palace District will also be the site of a future convention- headquarters hotel featuring up to 1,000 rooms. This district is also one logical home for a future Global Exchange Place, a group of buildings that could include an international mediation center, a language translation facility and educational components - all gathered around a pedestrian-oriented plaza.

Gateway District
The Gateway District is entrepreneurial, lively and inventive. It is an incubator for new enterprises and creativity -- the place where artisans, writers, entrepreneurs and others congregate to live, work, shop and converse. It's warehouse spaces are filled with art galleries, high-tech businesses, unique shops and one-of-a-kind restaurants. The Gateway District encompasses a broad swatch of downtown stretching west to Interstate 15 and including several sub-districts such as the Rio Grande District, Granary District and The Gateway shopping district itself. As the name implies the Gateway District is key to downtown as the entry point for most visitors via automobile, light rail, bus and commuter rail. It is home to the new Salt Lake Central Station, the intermodal transit hub that will grow in importance along with the downtown and regional rail network. Its excellent transit connections, supply of warehouse structures, superb shopping and undeveloped land make the Gateway District a center of focus for Salt Lake City's growing downtown.

Grand Boulevards District
The Grand Boulevards welcome the world to downtown Salt Lake. This district includes the foremost entry corridor from the Salt Lake International Airport and is also home to many of Downtown's hotels. With many hotels, it is truly a hospitality neighborhood. As such, the Grand Boulevards offer an outstanding first impression. The dominant features of this district are 500 South and 600 South leading to the doorstep of the Grand America Hotel. Buildings here clearly have the strongest presence on the street - creating an urban ambience - while stately landscaping hints at the beauty further within downtown. The urban design is monumental, befitting the width and character of these Grand Boulevards.
Posted by Mickelle at 10:45:00 AM

Labels: Articles about Salt Lake, Going Green, money smarts, Pioneer Park, Places to buy stuff you want, So you wanna live here?, Where to see and be seen

Labels: Where to see and be seen
Newer Posts Older Posts Home
Subscribe to: Posts (Atom)