As with so much encouraging news these days, the success of the surveillance cameras at Pioneer Park comes with a caveat of concern.

To begin with, the cameras have done exactly what they were supposed to do. They have reduced crime. Calls to police about drug-related problems have been cut almost in half. And because the cameras at the corners of the park are so visible, only two dealers have braved them. Both were arrested.

All that is a plus.

The concern comes later — when dealers begin to disperse and do their business in surrounding neighborhoods instead of congregating at the park.

In short, criminals don't go away. They just go elsewhere.

So busting up the pushers in the park may well be like scattering a nest of spiders. One big problem can quickly turn into a hundred small ones. In fact, some citizens would prefer the desperate be allowed to stay at the park. That is where social service organizations can easily find them and supply needed medical, intervention and nutritional needs.

But a civil society must do what must be done. And winking at felonies in one part of town while cracking down on them in others is not a solution. It's a dodge.

Pioneer Park is a legacy park. In recent years, it may not have lived up to that legacy, but it is still the place where the Mormon pioneers spent their first night in the Salt Lake Valley. Down the decades it has been the site for many historical and cultural events. In the name of convenience alone, it cannot be allowed to remain a haven for anti-social behavior.

Where there's lawlessness, the law must move in.

And though dealers may have filtered out into other areas, Pioneer Park itself has a new look and feel. Merchants and visitors there remark on a friendlier tone.

As for those who wonder if police use of surveillance cameras may be a slippery slope toward trading freedoms for security, we feel that's over-thinking the issue.

The police saw a problem with felonies at the park. They found a way to correct that problem. And the city is better off for it.

We commend the Salt Lake City Police Department for a job well done. 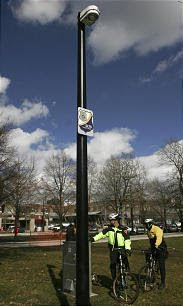